Due to threats of severe thunderstorms, we were unable to visit the nearby beach and instead learned about Koko the gorilla, known worldwide for her command of American Sign Language and love of kittens

We part ways and head off to summer vacation after a last game of kickball, a longtime cherished Everett activity 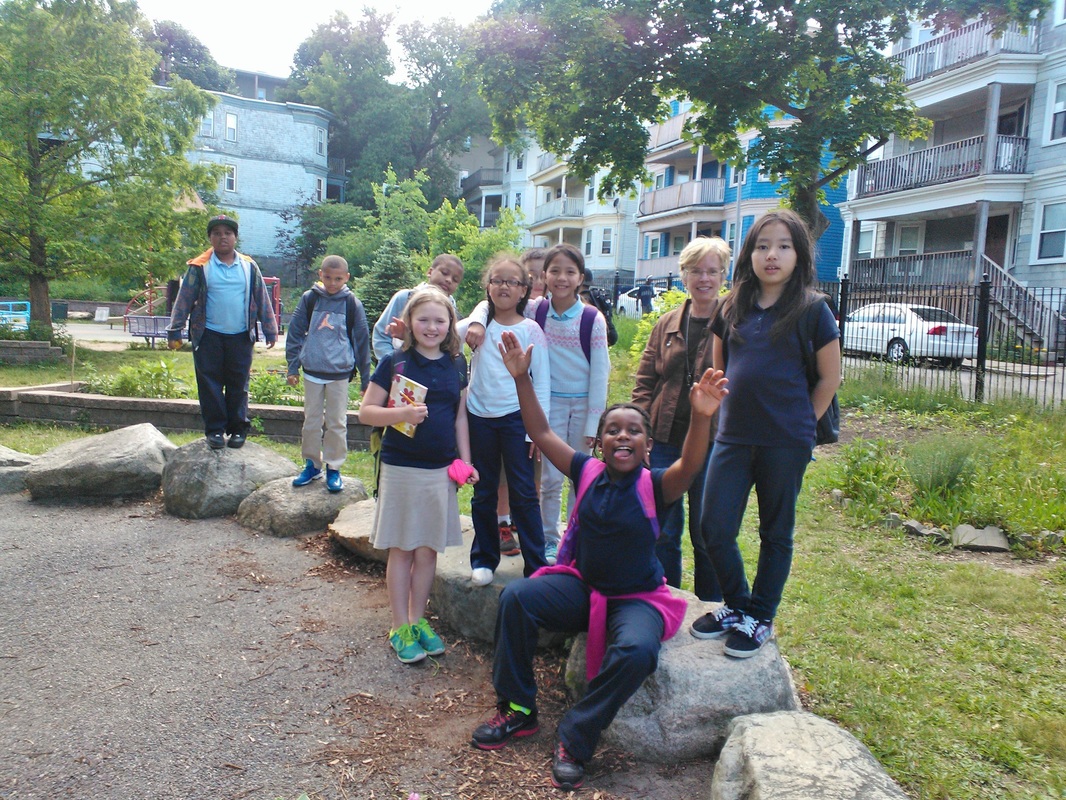 Ephemeral – something that will go away. Andy Goldsworthy – artist.  We made a fort out of sticks. The sticks were leaning against a tree. After we put the sticks up, we put stuff on the sticks. We put smaller sticks on the big sticks. We made an opening for people to come in. The opening wasn’t very big. We also put old keys in there so it looked real. The keys were hidden though.        Aaron 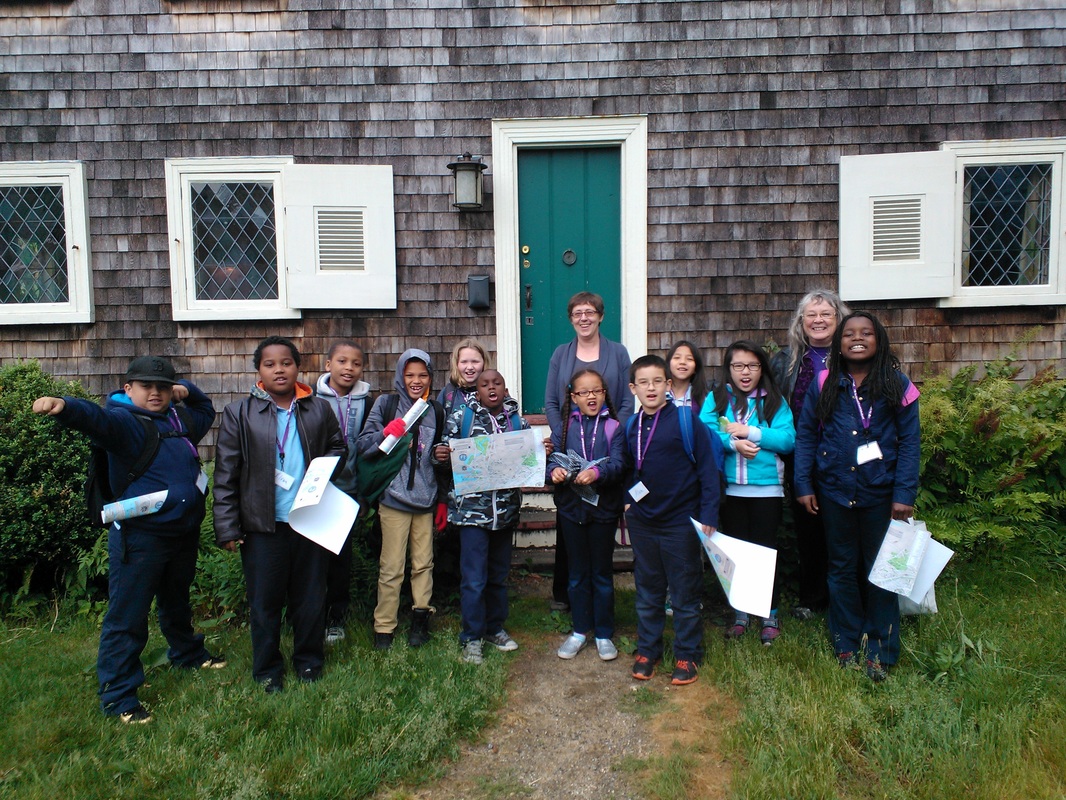 The oldest house in Boston, 400 years.  There is no paper so they use “slates”. Scientists back then take plants for medicine like now. Boys dressed in a gown like clothes. Paul Revere’s house has the same windows as the Blake House. The house was moved a lot of times with horses.       Amy

There is a small brick oven to bake bread and a big oven to toast bread and cook food. People use shotguns (musket) to hunt. The house is 400 years old but the trees are 800 years old.            Alex

They had cellars to protect their food, the window is stained glass and that they got it from England. That boys and girls dressed kind of alike. That they use a fireplace to get warm and cook. That they mostly did not eat their animals.            Jessica 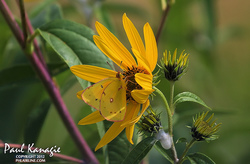 a butterfly by the same color as their skin, like if a flower was yellow, and the butterfly is yellow, it will hide in the yellow flower.        Jazera

Some butterflies use camouflage to hide from predators        Alex

In China when the silkworm is in a cocoon, they get the silk and make fabric. One thing is that if a butterfly is black and yellow and a bird saw it, it would not eat it because it might look like a bee        Jessica

The disadvantages of planting the hillside were it was so steep I almost fell and I had to support Eric.
Another problem is you had to make the plant stand up and it was hard. Also, we had to dig deep.        Alex 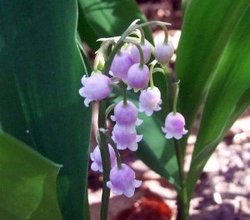 We looked at a pink lily of the valley flower, ate radishes from the schoolyard, tasted violet flowers, and the nectar from red clover. We also planted sprouted potatoes and transplanted thornless raspberry.

The lily (of the valley) smells like a fresh candle. It is a purple small flower. The lily looks so fake. But it’s really, REAL.        Song 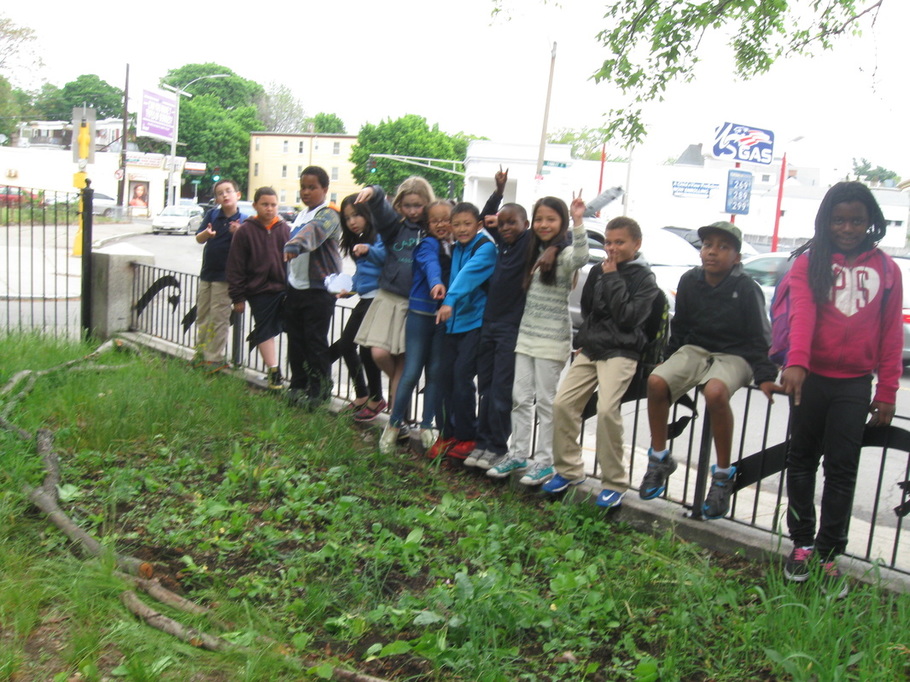 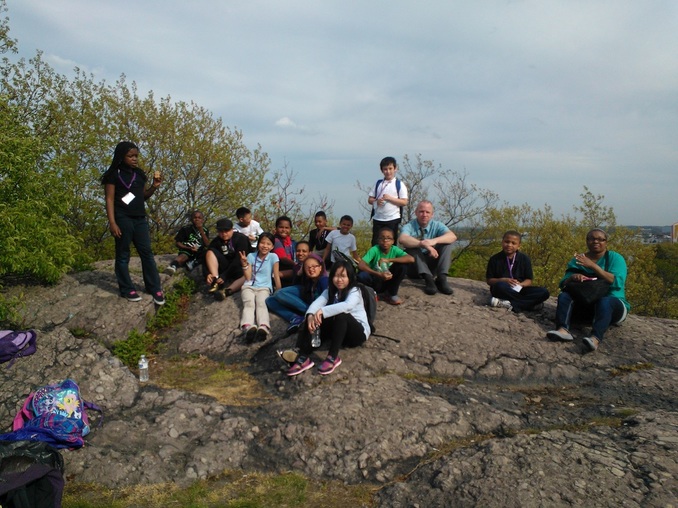 We are going to the top of Savin Hill. On our field trip we eat our lunch and we were sitting on a rock called a pudding rock.    Song

The rock that the Wamponag (actually Neponset) lived was really cool. When we were hiking on the rock, the view is beautiful. The rocks were ice before (glaciers).
Amy


When we got there we saw some puddingstone, then we stared up and saw all of Boston, even the highway.         Jessica

I liked climbing. I liked seeing stuff. I liked being so high.        Xavier

we started to climb and slide down a wall. Then we tried to find the place Indians took a picture. Then we went back down the hill. We passed a basketball court and two tennis courts. Then we arrived at school.        Alex

I liked the part of the trip where I got to show my friends where the mayor lives. I also like where we sat on the rocks, and climbed the rocks        Malik

Inside the classroom, students prepared their notebooks and compared the scent of a sprouting onion and a bag of pine needles before going outside to observe the new plants in the schoolyard. Here are some of their comments and photos:


We eat onions and not pine needles. 5th graders made the tiles in front of school. They tore down a house to make a big school. Acorns are everywhere.    Aaron
We learned that the school (where the school is now) was a mansion. There are a lot of buds. I see purple colors.            Elvan
The tree (pine needles) smells better than the onion. They both are plants.    Jomani 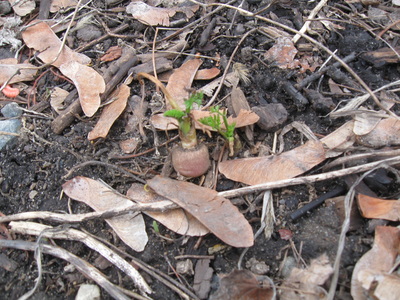 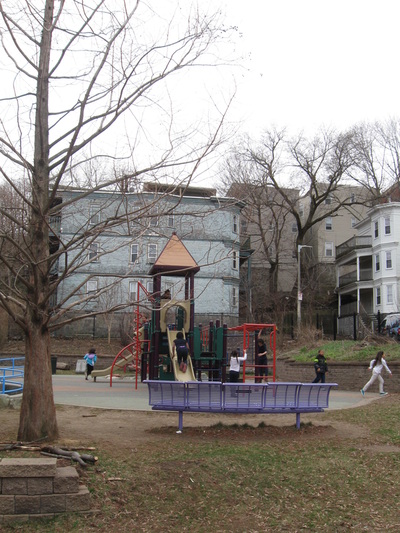 The dawn redwood is still bare 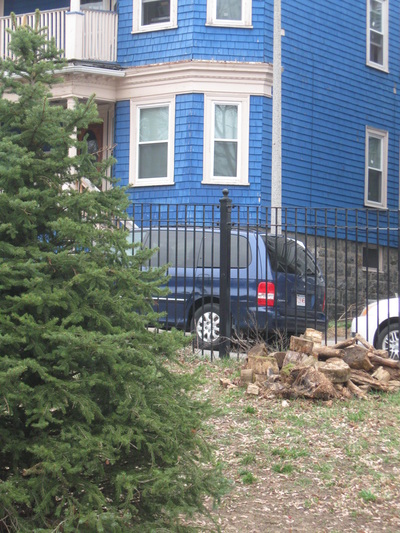 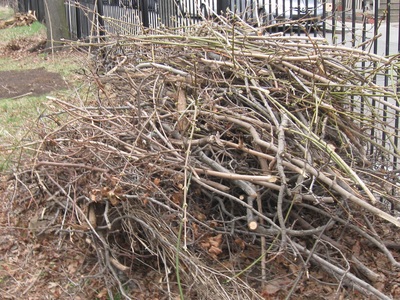 The brush pile that will be the base for the hugelkultur
A dogwood tree has buds and red bark. Catkins are very soft. I found a carrot.        Lucy

﻿﻿The environmental club members will pull out maple sprouts and will observe other kinds of sprouts, including those that we eat.
If my backyard is any indication, there could be hundreds if not thousands of maple sprouts in the schoolyard. We also looked at a branch of forsythia. More comments;﻿﻿


Today is sunny, not windy and people are going outside.        Malik

Forsythia is yellow and can sprout early.        Alex

Bean sprouts can be eaten with noodles. Tulips are orange.        Amy 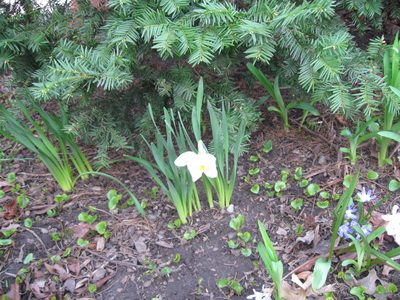 I saw another flower called daffodil and the color of it is white. Isaiah 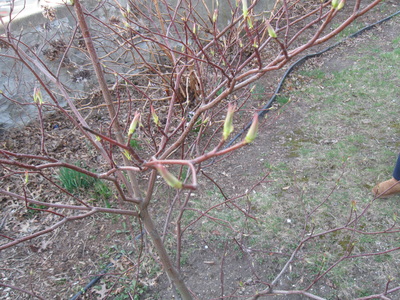 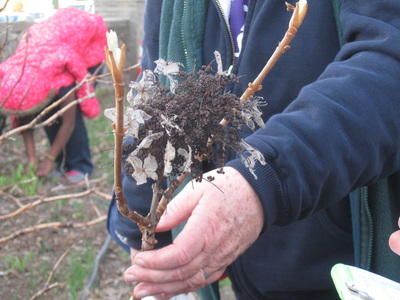 Overwintered flowers and seeds of the oakleaf hydrangea 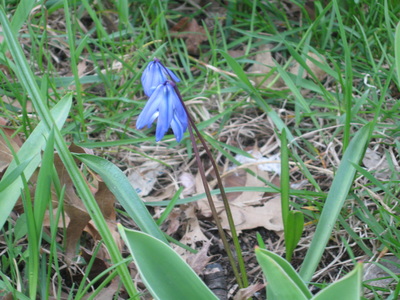 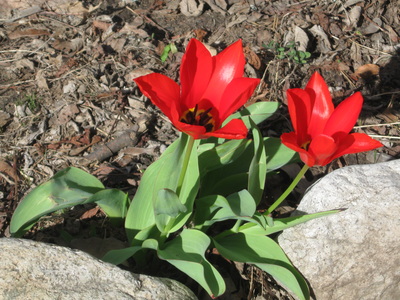 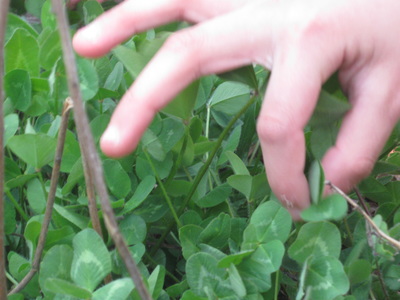 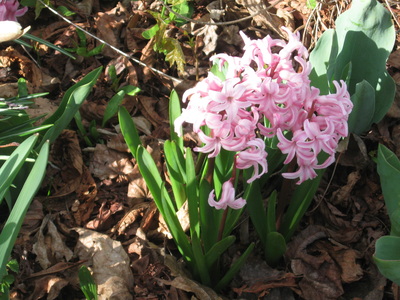 hyacinth
I saw red tulips. The inside of the tulip is yellow and black. I found a wild mustard (plant).        Isaiah 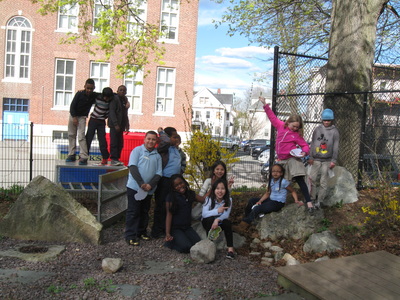 Students and forsythia in the outdoor classroom 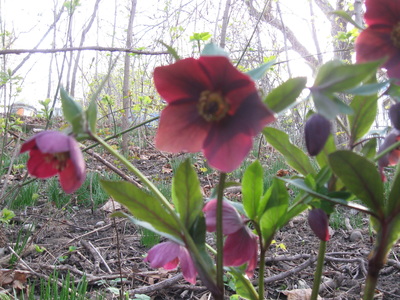 Last week we saw a flower that had purple petals, it is called hellebore Jessica 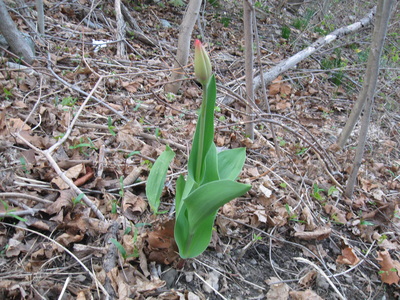 a lone tulip sprouts on the hillside
Last week we saw a flower that had purple petals, it is called hellebore        Jessica 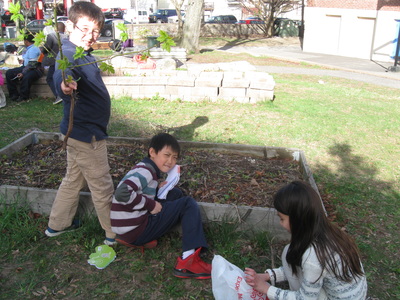 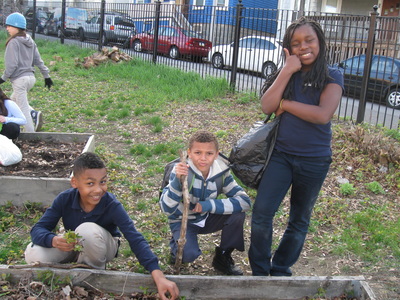 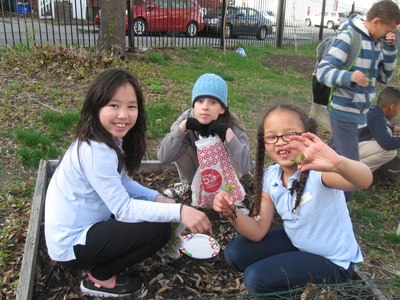 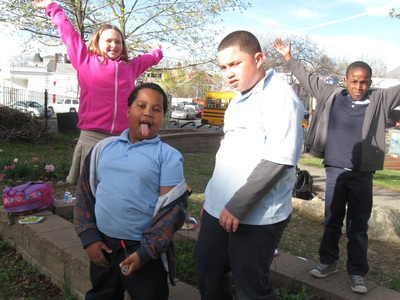 Many plants are grown from seeds & we also eat many kinds of seeds, The students separated marigold seeds from dried plants for planting.

We took out seeds from marigold …. There were a lot of seeds … the seeds don’t look like seeds        Aaron 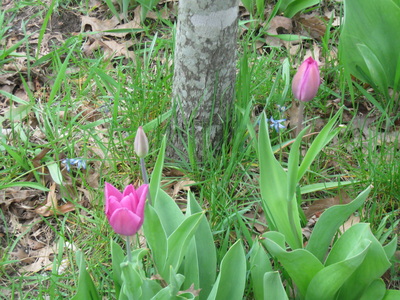 Tulips bloom under the redbud tree. 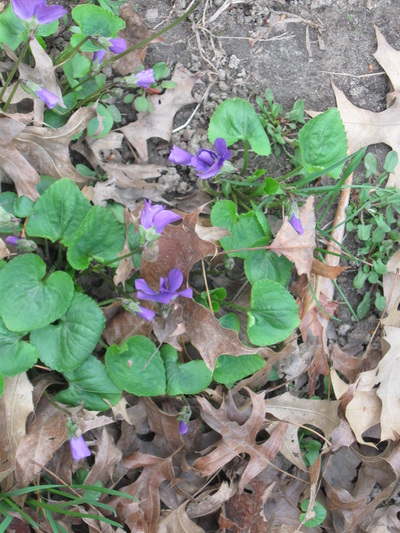 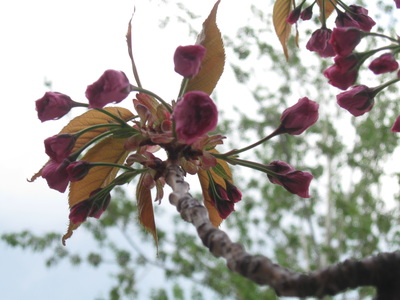 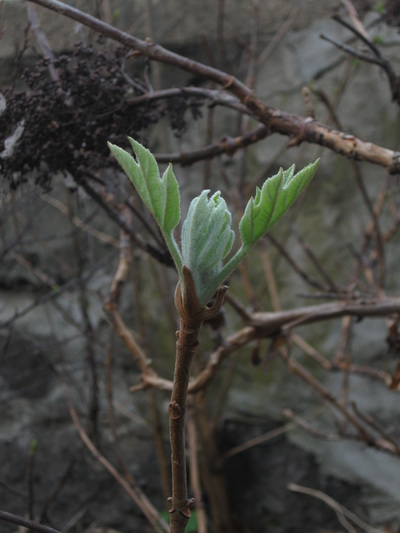 I found flowers called violets in the school garden.         Isaiah

Oak leaf hydrangea. It is a bud that is turning into a leaf and two fuzzy things are next to it. There is something on it that looks like teeth.        Malik 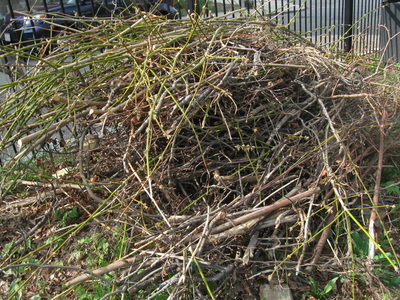 The hugelkultur before the compost 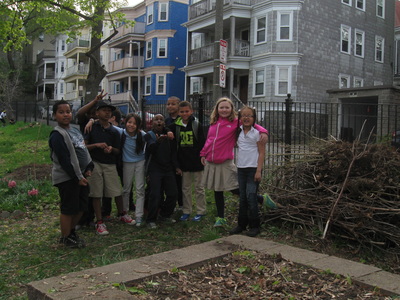 Club members next to the newly planted hugelkultur
We are planting an experimental hugelkultur, where you add compost to a pile of brush and plant on the top and the sides.
Writing and photos courtesy of the 2015 Everett Environmental Club students, except when attributed elsewhere.
Alicia Zipp