Everett environmental club members get to know the schoolyard habitat by observing the plants, animals and insects there as spring returns to New England. They keep nature journals, and learn about gardening, recycling and composting.

Talyn G: We found a tree called a quaking aspen, and the bud is called a catkin. There was a forsythia with hundreds of buds

Neia B: The emperor changed color, it’s green now. We found a crocus, they are very pretty (and) purple.

Talyn G: we had to collect seeds and gather dirt (for planting)

Ines B: We plant potatoes 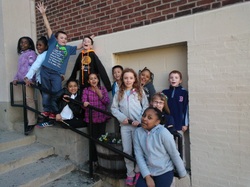 Kaena O: A perennial is a plant that comes back. Irrigation is another source of water than rain to water your plant.

The club planted pansies in the oak bucket planter in front of the school. 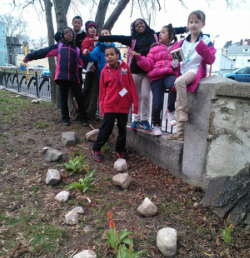 Talyn G: The vocabulary of the day was succulent. That is a kind of plant that doesn’t need a lot of water. The jade plant that … we held doesn’t have water but has roots coming out of it!

The flowers continue to grow during vacation week

Kaena O: When we went to Savin Hill, we looked at pudding rocks (puddingstone)

Ines B: We were climbing rocks.

Connor Tran: Today we are trying to find the rock in the picture with the Neponset Indians.

Jenny T: We planted and pull(ed) things that we didn’t need in our garden. My partner was Kaena and we planted radishes, pumpkins, and larkspur seeds. … We thought we were going to put water ourselves, but we were just letting the rain do it.

Alonah Fields: We (Alonah and Jainiyah) had to shape our spots … we made a square, then we cut the square in 4 small squares. The seeds we used were carrots, radish, squash and flowers.

Dylan C: I planted the three sisters … (they) are squash, corn and beans. i think they take 2 months to grow. 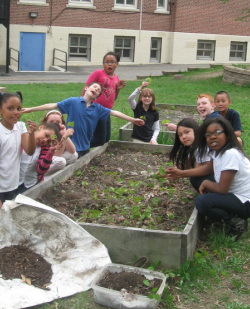 Connor T: The lilac (Ms. Zipp brought in) has a lot of tiny purple flowers. (Outside) There are millions of violets in the circle … and a red bud tree. The bark is splotchy, and it is red bud even though the flowers are purple. The third thing we found is called a bottlebrush plant. It has white petals … next thing we saw was these white flowers, the white flowers are going to form into strawberries.

Alonah F: When we went outside we learned that compost can be made by green leaves and brown leaves.

Club members pulled small maple sprouts from a raised bed and added compost to it.

Sofie Borges: Endangered species are species of animals that are very rare and there are usually very few numbers of them. This happens when humans cut down, burn down, or ruin the animal’s habitat. Other times humans hunt them down for meat, skin or bones.

Zinely Fernandes: Today is rainy so we decided to stay in. We are reading about Koko and her kitten, everyone did great reading the book … it stopped raining so we went outside … we are taking out the long grass, but not the flowers. We also took out the snails.

Megan Hammock: Some of the animals that are endangered (are) pandas, gorillas and bald eagles. We read a story about a gorilla. She isn’t any old gorilla. She knows sign language. Her name was Koko. Koko wanted a cat. Koko asked and asked and she finally got one. She named him Ball.

Luke Kyne: Koko wanted a kitten for Christmas but instead got a cement one, not a real one. She started bouncing off the walls because she was feeling disappointed. … Sadly one day, Koko’s kitten was walking across the street … was hit and died instantly. Koko did not know what to do … (she) used sign language and signed, “kitten sleepy”. On the next Christmas Koko was surprised and got a new kitten.

Mushrooms sprout on a stump after the rain
5.29.14 Working in the garden, sunny and 60’s

In the front bed by the wall, club members used a tool called the “weed wrench” that acts like a lever to pull out trees that cannot be pulled out by hand.

They also added sunflowers seeds to the strawberry bed.

Jenny T: Ephemeral art is art that is made out of things that are outside and (then they) just disappear.

Talyn G: (inside) ... we made found art. (outside) Then we made forts out of nature.

Jainiyah S: What we did in environmental club is we got to learn more about outdoors, plants and we went to field trips to experiment how places are alike just like we do at school in the yard. My favorite thing that we did was we went to Savin Hill beach.

The tide was out so some students looked for sea creatures like snails and crabs while others worked on their sand castles.

Photos and text by the students of the environmental club and Ms. Zipp